Twins? Yes, our hands are full and our hearts too. 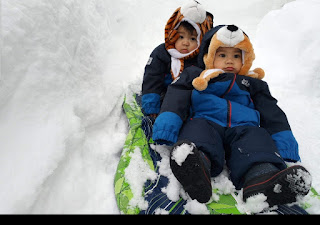 Blessings just come in many shapes and forms. Once you have it, cherish every bit of it. I have dreamed of becoming a mother, prayed so hard and finally, God granted it.
After delivering Tom and Tim, I always heard people telling me that babies just grow too fast so I have to enjoy every moment. I casually replied to them with a nod and a smile without really knowing what they meant. All I can feel during that time were the sleepless nights, constantly sterilizing feeding bottles, feeding the twins, patiently waiting for their burp after every feeding session, changing nappies, bathing and all other kinds of stuff that new mothers do.

Twins? Yes, our hands are full and our hearts too.
Now that they are 16 months old, I realized that when they were newborns, my plate was so full in addition to the anxiety that I felt--wondering if I would ever be a good (enough) mother to the twins and how would I do that. Because of this reason, I did not truly and fully unde…
Post a Comment
Read more 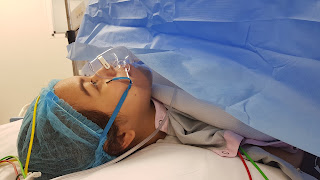 Challenge: Feeding Premature Newborn Twins
Tom and Tim are now 15 months old, they eat solid foods of course, rice, veggies and fruits. I can still remember when they were newborns, they were born premature. I started experiencing labor contractions at 31 weeks of my pregnancy. Doctors kept me on complete bed rest, tablets and injections just to buy some time for the twins and then I delivered them via CS at 34 weeks.


They were born 1.5 and 1.6 kilogram and we were informed by the doctors that letting them gain weight should be our goal the the next weeks. This goal is challenging considering that the twins are not so goodie sucking yet. We used a couple of techniques just to stimulate them to take 10ml for Tom and 14ml for Tim (computed according to their weights.) We used tissue paper to touch around their faces and ears, we made a piece of cloth a little bit wet and touched a certain part of the their bodies in order to wake them up and remind them to continue suck…
Post a Comment
Read more

My family moved to a new place. We brought the twins to a place that the four of us have never been to.
It is a new page indeed. Big tides came over few months ago, but because God is on our side, we have victoriously overcome.
Now, we need to turn over a new leaf and have a fresh start.
Tom and Tim: They have adjusted very well with their new room. They have their own crib  which is something new to them and more importantly, coughing or fever instances have greatly been reduced to none.
Both can crawl now and Tom starts to make two to three steps without holding to the wall. Tim learned how to clap first then Tom followed. Tom has 5 teeth while Tim has 2. They are twins but they have two different personalities. Moreover, they have achieved their developmental milestones appropriate for their age.
It is totally a different work environment and workload but I have considered the long term benefits and the better environment I would raise my children at, …
Post a Comment
Read more

What makes nursing so special?

To the best parents ever.,.

May 05, 2019
People tend to recognise the full worth of their mothers and fathers when they're gone. This should not be the case.

I have the best father and the best mother in the world, I am sure of that. Though they have come from very poor families, they have shown us that we reap more blessings if we sow kindness, hard work and sacrifices.

When my father was younger, he used to be a pedlar of many things like wall mirrors and figurines and he also worked as a cleaner in his college campus in order to finish his studies. I used to hear his old stories reminiscing the days when he had soy sauce and oil as viand plus rice, this would serve as his meal for the day because he cannot afford to buy a decent and nutritious food.

On the other hand, my mother also strived hard to be able to sustain her studies. She used to sell fruits in exchange of a piece of paper because she said she has a dream of earning a degree even if it seemed so difficult because she came from a large family of fifteen mem…
Post a Comment
Read more

March 01, 2019
Kurt Thomas and Kurt Timothy were delivered via LSCS at 34 weeks + 5days, around a month premature. Fortunately, we heard their good cries. From the nursery, they were roomed in just 4 hours after the operation.

Having a newborn is such a priceless and delightful feeling of every mother, just imagined how overwhelmed was I having two sweet little babies. However, this stage also spells out different things like sleepless nights, long hours waiting for him to burp, diaper change, frequent feeding as much a possible. Above all of these is my post CS wound that is very painful in whatever position I put myself.
My husband works away from home so he comes once in 1-6weeks. I have to do everything on my own. Learning how to be a first time mother and deal with the excruciating pain of my wound.
My mom and I worked together in developing a routine in taking care of the twins. But my mom needs to go back to work so my mom-in-law replaced her. Long story cut short, my mom in law  got tired o…
Post a Comment
Read more

it is a twin pregnancy

March 01, 2019
Gilbert and I were married last 2016, got pregnant after a year but miscarried. In 2018, we learned we got pregnant with TWINS. Though we were not surprised because we have twin relatives on both sides, still the idea of having 2 babies inside my tummy is not sinking in yet.
February 14, Valentine's Day of 2018, we heard the first heartbeats of the babies. We were not able to hear it during our first pregnancy so this is a big deal for both us. Tears just fell, as we are in awe of what we are hearing.
I started to the little ones inside me thereafter. I told them not make me vomit because I have read moms of twins experiencing double the symptoms and hardships of morning sickness. indeed, they did not make me feel I am pregnant with twins at all, except for having a much bigger baby bump than other mother's with the same age of gestation as I do.
At 14weeks, I have known the gender of the twins already. However, my husband does not. I have told him while we were inside the ca…
Post a Comment
Read more

twinsmom
mother of twins, Kurt Thomas and Kurt Timothy. I have also been working as a registered nurse since 2009.